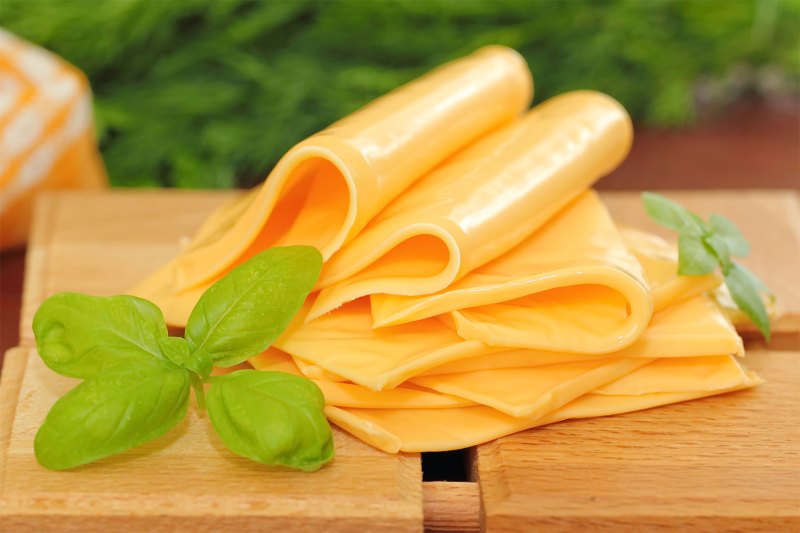 As a professional food writer who’s also an unapologetic fan of “lowbrow” eats, I’m here to tell you that food-related pleasures shouldn’t ever be a reason for guilt. If a meal or snack brings you joy, then there’s nothing wrong with embracing that feeling of satisfaction, whether you get it from a pricey cut of Wagyu beef or from a well-placed stream of processed cheese.

There’s a reason why processed cheese slices are so often used to make grilled cheese.

A successful grilled cheese relies on the quality of the melt, which can make hard cheeses a tough move for this sandwich. If you cut your slices of cheddar or Gouda too thick, then you may end up with a grilled cheese that’s nearly burnt on the outside but hardly softened on the inside. But if you swap in a Kraft Single, then you’ll avoid the threat of inconsistency and will get a flawlessly melted grilled cheese interior every single time. Processed cheese slices don’t have the complexity of flavor of their true cheese equivalents, but that even melt can’t be beat.

Many versions of “Texas queso” rely on Velveeta.

The Lone Star State takes enormous pride in its signature chip dip: A warm, creamy, spicy, cheese-packed concoction appropriately known as “queso.” Plenty of queso makers use “real” cheese as their dip base…but, as you can see from this recipe modeled after the famous queso served at Austin-based Torchy’s Tacos, this process requires a great deal of time, attention, and energy. That’s why many Texans make use of a classic queso shortcut with only two ingredients: Rotel canned tomatoes & green chiles and Velveeta.

A bright yellow block of processed cheese product, Velveeta’s mid-century popularity came entirely from its smooth, clump-free molten state, and that characteristic allows it to continue its homemade-queso dominance. Velveeta-Rotel queso is a staple of game-day snack platters in Texas because it’s consistent, it’s easy, and it hits the spot every time.

Discussions of Philadelphia cheesesteaks can become contentious when the topic of cheese arises. Some cheesesteak aficionados insist that real cheese (specifically provolone) is the only appropriate dairy accoutrement for this sandwich … but an equal number will tell you that Cheez Whiz (a processed cheese spread already in semi-liquid form and sold as a dip or a sauce) is a natural match for chopped steak and onions in a hoagie roll.

I love provolone as much as the next cheese fiend … but I’ve also eaten enough cheesesteaks outdoors in brisk weather to know that melted provolone has a tendency to seize up and solidify in cooler temperatures, compromising the desirable melty texture of the cheesesteak filling. Cheez Whiz helps you avoid that grievous fate; it remains soft and pleasantly gooey for far longer than its real-cheese competitor, and it offers the cheesesteak a salty boost that ties all of the sandwich elements together. TL;DR: When it comes to cheesesteaks, I”m Team Cheez Whiz all the way.

Provel cheese is a staple ingredient in St. Louis-style pizza.

While not quite as well-known as New York pizza or Chicago deep-dish pizza, St. Louis pizza holds a special position in the pantheon of regional American pizza varieties, and its standout ingredient is Provel cheese, a processed-cheese product that melts easily and tastes like a combination of Cheddar, provolone, and Swiss. St. Louis pies use Provel in lieu of the classic mozzarella, and this locally made product makes an ideal complement to St. Louis pizza’s thin, cracker-like crust and herbaceous sauce.

These four reasons (in addition to my own nostalgic fondness for processed cheese) comprise my argument in favor of these dairy-adjacent products … but if you’re dead set against buying Velveeta or Cheez-Whiz but still want that easy meltability and smooth texture, then try this “processed cheese” recipe by Dorothy Lane Market culinary director Carrie Walters, who tells us that her cheese sauce is “very versatile, better for you than the store-bought versions, and it tastes amazing.  This type of ‘processed cheese’ makes ooey-gooey mac and cheeses and other casseroles extra special. It is perfect on a Philly cheesesteak or a hamburger. It has a smooth consistency and is lusciously creamy. Making it yourself takes the ‘junk food’ factor out of the equation, and it’s also gluten free.”

Are Meal Kit Delivery Services Worth It?

11 of the Best Meal Kit Delivery Services for Healthy Meals

8 Tips to Trim Down Your Grocery Bill as Inflation Skyrockets

These are the 7 Best Picnic Recipes for a Crowd

The Best Anime Series on Netflix to Watch Right Now

What Channel is UFC on Tonight? Tune in to UFC 276 Live

Watch UFC 276 Online: How to Stream Adesanya vs. Cannonier

These Are the 10 Best Mattresses for Kids to Sleep On