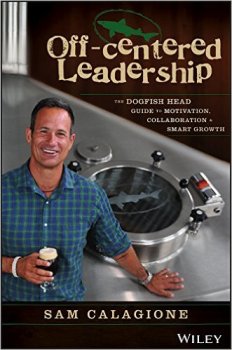 There are a handful of rock stars in the world of craft beer. First you have the OGs like Fritz Maytag of Anchor Brewing, Jim Koch of Boston Beer Co. and Ken Grossman of Sierra Nevada. They made themselves known simply by being first and then having the gumption to stick around through the lean times. The huge and ever expanding landscape of craft beer owes these gentlemen a huge debt.

Then there are the second-wave guys. These are the brewers and owners who used their platforms to become more than the men behind the kettle: true beer world celebrities, outlandishly rethinking the landscape of American beer in the process. This class is dominated by none other than Sam Calagione, founder of Dogfish Head Brewery. In addition to being the original brewer, Calagione has also distinguished himself as company president, a reality television show personality and James Beard Award nominee.

In 2005, he added “author” to his resume with the book Brewing Up a Business. It’s the rare behind-the-scenes business tome that is also highly entertaining. Despite all his success, Calagione doesn’t take himself too seriously. He’s more than happy to share the low points along with the highs, and make you laugh and learn from his folly along the way.

As Dogfish Head has continued to grow and thrive in the last decade, it was time for Calagione to follow up with his second book, Off-Centered Leadership. This play on Dogfish Head’s slogan (“Off-centered ales for off-centered people”) rings true as the author expands upon the secrets he’s learned as company president. In this new book, he discusses the craft brewing industry’s fight against the big beer juggernauts and describes his unique, zen-like approach to establishing a new company culture at Dogfish Head.

We’re inspired to innovate in order to render positive karma to our beer, our company, our customers and the entire craft community.

Particularly enriching are the excerpts where Calagione attempts to define Dogfish Head in the aftermath of its success. How do you keep a company fresh and nimble when it has grown beyond the founder’s original visions? How do you keep a competitive edge and also be supportive of the newcomers to your industry? How does beer specifically influence topics of global and personal importance?

While Sam doesn’t answer all of the questions that the book posits, he addresses them straight-on with the candor and wit that we’ve come to expect. And while the book provides lots of juicy behind-the-scenes information for craft beer aficionados and Dogfish Head faithful, there’s plenty left over for those looking for real-world leadership tips that will translate to any industry.

This Company is Reaching Net-Zero With CO2-Based Products

Bourbon 101: An Intro to America’s Spirit

Get To Know 6 Trending Types of Beer Hops

A Guide to Sicilian Wines, the Best-Kept Secret of Italy

11 Excellent Wineries in America Worth Booking a Vacation for

Nectar Memorial Day Sale: Save $599 on the Mattress Today

The 11 Best Massage Guns for Your Post-Workout Recovery