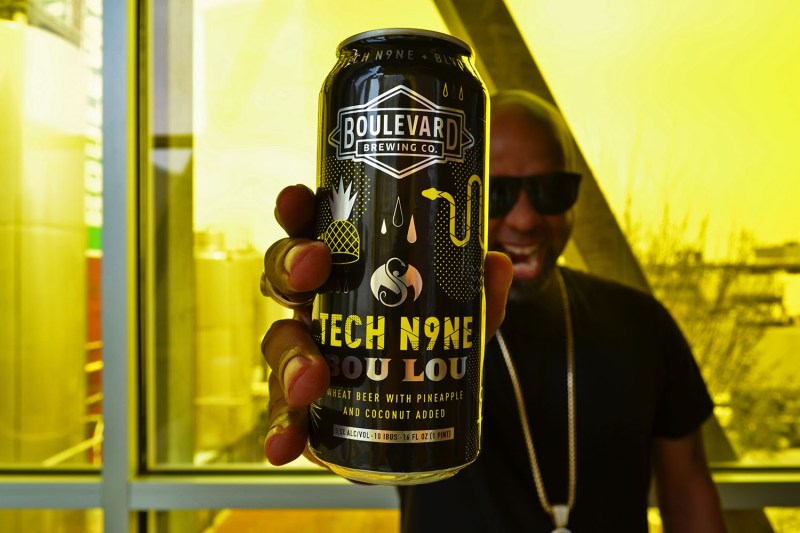 When two employees at Boulevard Brewing Company thought about brewing a beer for American rapper Tech N9ne, they took matters into their own hands and reached out.  To their surprise, the rapper’s label company, Strange Music, got back to them soon after and they roped in hip hop fan and Boulevard digital marketing manager Pat Mullin to help get the full brewery on board.
“As soon as I heard about it, I made it my goal to see it through and make it happen,” Mullin said. “It was a long process.”

Before too terribly long, however, a meeting of the minds was held and Tech N9ne was visiting the Boulevard brewery and it was time to determine what beer to make.
“We all knew we wanted to make a homage to Caribou Lou, his signature drink, what better than to play off of it,” Mullin said.

So the brewery whipped up a test batch of Boulevard’s wheat beer and threw in some coconut and pineapple to see how it all played together. To Tech N9ne’s surprise, it hit all the right Caribou Lou notes, a drink he’s touted since the 1990s when he and some friends wanted to make a drink with Malibu and 151 rum after playing a concert with E-40, who had the Sluricane Hurricane.
“We went down and tasted it and it’s Caribou Lou,” Tech N9ne said of tasting the beer for the first time. “It was perfect. [Caribou Lou is] a big thing for my fans; they’ve been waiting on Caribou Lou and now it’s a beer.”

“It was perfect. [It’s] a big thing for my fans; they’ve been waiting on Caribou Lou and now it’s a beer.”

The beer, Bou Lou, made its packaged debut last year, before rolling out with wider distribution this year in time for Tech N9ne’s latest tour. A major draw besides both parties being from Kansas City and brewery employees being fans of the artist was the realization Tech N9ne and Strange Music would be massive supporters of the beer itself.

“I knew how much of a fanbase he has and see the sheer amount of content and engagement he creates,” Mullin said. “But it’s been really impressive.”

To help with the Bou Lou launch, Strange Music helped provide video support as they filmed a six-video series called “Temp N9ne” of Tech N9ne working around the Boulevard offices. Mullin said the skits were unscripted and let the rapper’s natural performance abilities shine.  The music label also helped secure distribution into venues he’s performing on his tour, a task Mullin said is more difficult than it might sound — even for a brewery as large as Boulevard.

Now, Tech N9ne will even pop in occasionally unannounced.

“I’ve always been a light beer drinker, never had an idea of the world that’s out there,” he said. “Now, I’m exploring. Boulevard is teaching me a lot about hops and I’m learning. Whenever I’m down there, I get an education. I can’t wait to just go down there and hang out.”

“Boulevard is teaching me a lot about hops and I’m learning. Whenever I’m down there, I get an education.”

Bou Lou is still in its infancy, only hitting a nationwide distribution earlier this spring, but both Boulevard and Tech N9ne believe there could be more in the future. Boulevard launched a line of canned cocktails this year, so could a canned version of Caribou Lou be in the works?

“You never know,” Tech N9ne said. “It’s gotta be so humongous that we can do that next thing.”

Mullin says, “Nothing is set in stone, we’re still working on the latest batch of this Bou Lou. What 2020 has to behold is yet to be determined. They’re such great partners, hopefully something.”

The Late Norm Macdonald Left Behind a Surprise Stand-Up Show

If You’re New to Mezcal, Then You Need to Start With These Bottles

How to Season a Cast Iron Skillet Like a Pro

The 10 Best Binoculars for Finding Your Game in 2022

The Ultimate Beach Vacation Packing List for the Summer