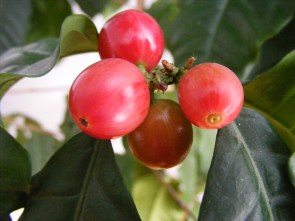 Plants in the coffea genus — the flowering plants that produce berries housing seeds we call coffee beans — produce caffeine as method of “plant defense against herbivory,” also known as host-plant resistance. Well, that didn’t work so well, did it, plants in the coffea genus? Indeed it is the caffeine itself that is arguably the largest draw of the coffee brewed from the so-called beans, beans which were first cultivated in Africa and southern areas of Asia, but which are now grown in many parts of the world and which are enjoyed everywhere when roasted, ground, and brewed with water to make coffee.

While this might seem almost incredible, there are no known accounts of coffee consumption before the 15th Century. For untold tens of thousands of years, the coffee berries just wilted on the vine, or else were consumed by excited, overstimulated animals (who likely went on to read Camus and listen to The Velvet Underground while dressed in slim fitting garments). The first known regular coffee consumption began in the Middle East, spreading from the Arabian Peninsula to western Asia and Italy, from whence it quickly became popular across Europe and, before long, around the globe.

By the 17th Century, people everywhere were pounding cups of coffee much like we workaday stiffs do here in the 21st Century. But while today’s coffee consumer can still drain cupful after cupful of this wondrous elixir like his or her caffeinated forebears, today we have new options at our disposal. If you love (or need) a good dose of coffee each day and you like bucking the traditional approach to life, then you’ll love these amazing new ways to make coffee and drink it, too.

Even if you never use your NISPIRA to make a single cup of coffee, you’ll still be glad you own this striking curio. This coffeemaker is something of a cross between Steampunk and Victorian in style, with elegant, intricate components wrought in bright gold hued steel and delicate glass. It features an alcohol-fueled burner that heats water to brew your coffee, which it then transfers to the goblet-shaped glass container in the form of strong, fresh espresso. It’s not exactly a swift or easy way to make coffee, but it is pretty awesome nonetheless.

Want to ingest coffee while on the go? Well, with Go Cubes that’s easy to do, even if “on the go” means you are commuting, jogging, or are in fact actively in orbit around the planet. That’s because you don’t drink this coffee, you eat it. Chowing down on two Go Cubes gives you 100 milligrams of caffeine, which is roughly equivalent to the caffeine content of one cup of coffee. The stimulant effect of the caffeine is rounded out and tempered by the addition of B6 and B12 vitamins and L-theanine, so you stay focused and jitter-free for hours. Unless you’re naturally jittery, in which case, no dice. Go Cubes come in “Mocha,” “Latte,” or “Pure Drip” flavors, so you’ll surely find a cube you love.

If you’re tired of the hassle of eating food simply because you need calories for survival and function, then you’ve probably heard of Soylent by now. It’s the “ready-to-drink meal in a bottle” that packs a complete battery of nutrients (protein, vitamins, minerals, etc.) into each serving. Coffiest is the latest creation from the company, and as you might have guessed, it makes life even more efficient than Soylent alone. One bottle of Coffiest provides 20% of your daily nutritional needs and the same amount of caffeine as a strong cup of coffee. Because why waste time… savoring… things?

Purists aplenty will argue that a French press style coffee maker is the best way to make coffee. And there’s something to be said for these devices, what with their ability to precisely control the duration of the brew process before you separate the grinds and the water. But you can also fairly call them often messy and annoying to use. Enter the Duo, a device that allows you to control your brew time and then cleanly separate water and grinds with a twist instead of with that laborious, slow press mechanism of the French press coffeemaker. Duo brews about twenty ounces of strong, fresh coffee at a time, and it comes apart for easy cleaning.

You know how the aroma of coffee permeating the house can help rouse you from your slumber and motivate the start to a good day? Well, imagine that aroma was coming from coffee being brewed inches from your nose on your nightstand. The Barisieur is partially an alarm clock, partially a slow drip single cup coffeemaker. At the appointed time, it will turn on its induction heater, boil water that will drip through coffee those grinds you scooped into its filter the night before, and brew a cup of coffee for you right there in your room. The base of the unit even has trays for coffee grinds and sugar, and a vial for your milk or cream. And if all that’s not enough to rouse you, you can set the audio alarm, too.

Spencer Pratt Talks Erewhon, the End of The Hills, and Crystals

The 23 Best Cookbooks of All Time

The 9 Best Gift Baskets for Men

How to Throw a Socially-Distanced Halloween Party

The Manual Is Back for Your Music Roundup With June Tunes

Native American Television Thrives: How Is This Helping Tribes?

Prime Day deal: 20% off the best electric toothbrush around

Prime Day Deals: The Shark cordless vacuum is only $200