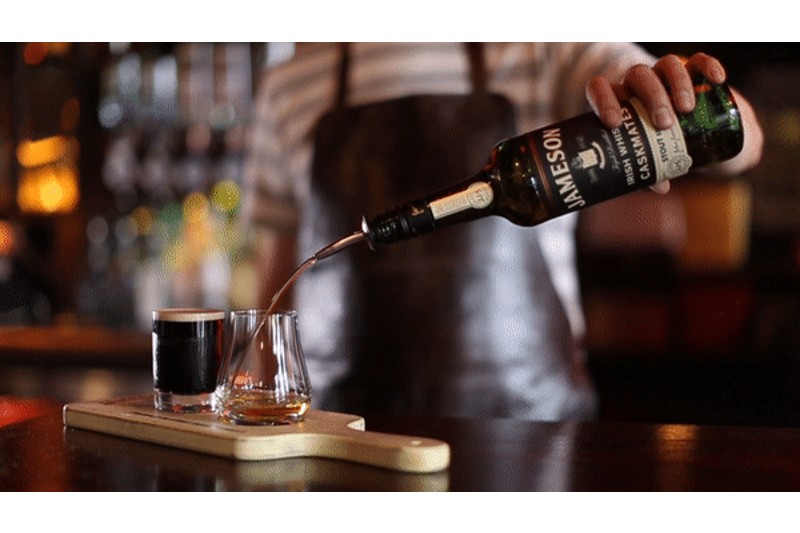 We like to check in on the quality of trending goods, from RTD cocktails to shave clubs. Next up, a much-buzzed-about spirit finished in old beer barrels.

We’re talking about Jameson’s Caskmates family of whiskies, which includes a stout version and an IPA version (not to be confused with India Pale Ale, we’re talking Irish Pale Ale here). The stout version especially has been garnering a fair amount of attention. Turns out, that attention is merited.

Honestly, this is a partnership that should have probably come about long ago. Although, the idea does date back to 2014 when a Jameson distiller and local brewer shared a pint and some ideas. Since, the distillery has teamed up with a handful of breweries, from Bale Breaker in Washington state to Revolution Brewing in Chicago.

Most of us have been to bars and enjoyed a beer back with our favorite whiskey. Often, that beer back is a cheap lager, which can still work. But the beauty of the stout is the roasted characteristics that the beer’s malt and barley can impart. And here, with Caskmates, you get those flavor injections plus the evening affect oak and barrel-aging so often provides.

Regular Jameson is a perfectly serviceable whiskey. Being an Irish whisky, it’s made with a combination of malted and un-malted barley. This yields, generally, a lighter whisky with flavors of citrus, vanilla, caramel, sweet grass, even some baking chocolate. A stout beer tends to often have a similar flavor profile, albeit on the darker end of the spectrum, showing things like a coffee bean, licorice, dark chocolate, and more.

This collaboration between Jameson and 8D Beers is solid. It could have easily been an over-the-top affair, aged too long in stout barrels and thus burying the nuance of the whiskey. At the same time, it could have been so lightly finished that the stout simply changed the name of the product and not really the product itself. Kudos to the team for finding a happy middle ground — one that, quite frankly, makes a pretty average Irish whiskey a lot more interesting.

The Jameson Caskmates Stout Edition packs a lot more fragrance and flavor than its fairly mild hue suggests. On the nose, there’s a nuttiness, alongside a flicker of citrus and an element of bakery-fresh goods, like coffee cake. On the palate, there’s toffee, graham cracker, vanilla, and the faintest bit of candied fig. It finishes smoothly and stout-like, showing some chocolate and even some grassy, tea-like notes from the hops. At times, it reminds me of a malted Whopper (malted milk ball) in a glass.

Normally, there wouldn’t be much of an occasion to sniff a pour of Jameson but the aromatics of this release are quite compelling. You’ll want to swirl it around a bit and maybe even pour it into a snifter as if it were a Cognac. After a few sips, you may detect something on the mid-palate you can’t quite put your finger on. I’m still trying to figure it out, but it falls somewhere between an almond cookie or marzipan and the last sip of green tea when you find a final drop of honey you drizzled in. On top of just being a well-constructed spirit, it’s more mysterious and unexpected elements like this that will always keep me coming back for more (if only to crack the code).

The Jameson Caskmates Stout Edition is very much worth trying out. As we head into cooler days and longer nights, this style of spirit is all the more appealing. And at its current price point, it’s easily one of the best of the bunch.

Best Cheap Espresso Machine Deals for October 2022
Add these 6 incredible, easy Tastemade recipes to your dinner rotation today
9 best fall beers and autumnal releases to drink this year
Video: This ‘new’ way to poach eggs might be the best (and simplest) ever
Canadian wine is better than you think: A tasty guide for this little-known gem
The Best Weight Loss Meal Delivery Kits for Diets and Beyond in 2022
A Guide to Modern Chinese Drinks from an Expert Mixologist
Embrace your inner basic bro: Learn how to make your own pumpkin spice
How you can help “Protect the West” with High West Campfire Whiskey
Is the future of American wine… Vermont?
Joven tequila: This new blend will make you rethink your stance on young tequila
What foods are high in iron? These staples will help you live a healthier life
The American single malt whiskey is (almost) officially here